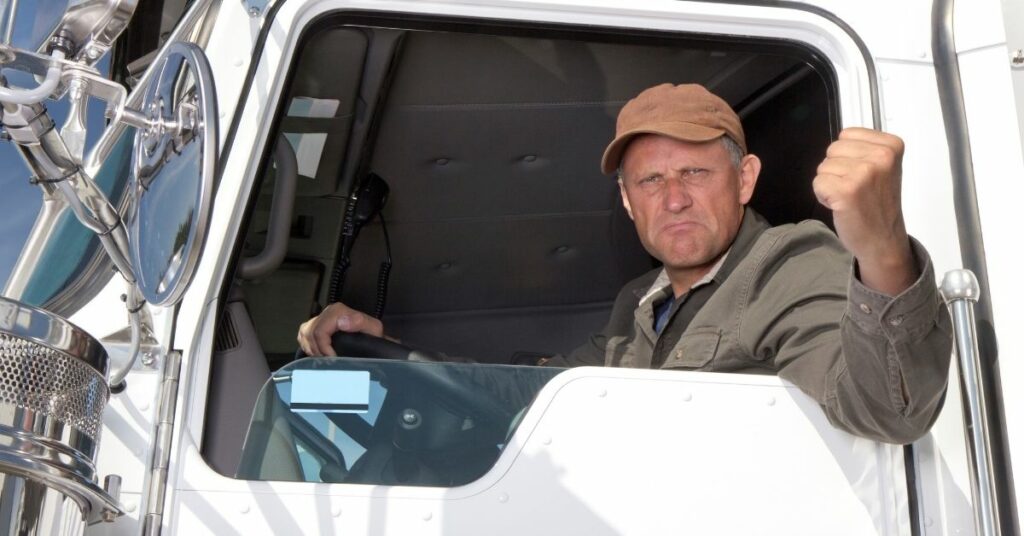 Small car drivers tend to be impatient with truck drivers most of the time. They don’t understand that truck drivers are ordinary people trying to make a living, and operating such large vehicles is not a trip to the park.

Let’s take a look at the truck driving job and some things that annoy them.

There are many things that happen on the road that infuriate and raise the blood pressure of truck drivers. Here are 5 of them:

Car drivers do not like trailing behind a huge truck. Usually, they will accelerate to move past it; after they are an inch ahead, they will suddenly realize that they are speeding and brake. This sudden braking is scary and annoying to truck drivers who abruptly slow down to avoid hitting the car.

Some car drivers will also cut truck drivers at traffic lights. This is very risky because there is not enough space between the truck and the car. The truck driver is not expecting a car to rush ahead, and the truck could easily latch forward and bump into the car.

Merging on highways and congested areas can be a nightmare for both car drivers and truck drivers. Many car drivers never prepare in advance to merge. They will begin to accelerate at the last minute to get ahead of trucks, while others will brake abruptly to move in behind trucks after noticing them.

This is usually risky, and truck drivers could cause accidents due to unexpected sudden movements. Car drivers should be more careful before joining another lane and merge at the ongoing traffic speed.

Most drivers will weave through traffic trying to get into lanes that seem to be moving faster. They will do it even without indicating that they are switching lanes.

This is frustrating to truck drivers who will need more time to slow down, yet they have not been given a warning in advance. Trying to keep up with the weaving cars while maintaining a safe distance behind them can be a challenge.

Truck drivers cannot easily see behind the truck and will not be aware that a small car is moving slowly right behind them. When small cars tailgate trucks, they don’t leave enough space between them and the truck.

This is dangerous as sometimes a truck may move a little back before moving forward, especially at stoplights on hills because of their heavy weight.

Safety Tips for Truck Drivers on The Road

Driving trucks enables one to travel to different places while giving them the thrilling control of a big machine. However, the career is also risky, with injuries and fatalities occurring in the line of duty.

Seat belts are the simplest way of preventing injuries and deaths while on the road. Most people who die in car crashes are not in seat belts.

Seat belts lower the risk of death by 45% and reduce the risk of serious injury by 50%. Truck drivers should wear seat belts at all times as a safety precaution.

Using handheld mobile phones to text or make calls while driving distracts truck drivers from the road and puts other road users at risk. If caught, one can be heavily fined, lose their job, or lose their CDL.

According to the FMCSA, using handheld mobile devices can attract fines and penalties of up to $2,750. However, if necessary, truck drivers can use hands-free phones located in close proximity or those that use voice activation to make calls.

Drinking and driving is forbidden all over the world, and it accrues fines. Other drugs, too, whether medicinal or recreational, will usually cause drowsiness and impaired judgment. This is highly risky while driving, and truck drivers should avoid all forms of drug use at work.

4: Be Aware of Your Truck’s Space Cushion

Trucks are bigger than other vehicles by height and weight. Truck drivers should be mindful of how huge their trucks are. This will help them ensure enough space on all sides of the truck to prevent coming into contact with other vehicles or nearby surfaces.

There should always be a good distance between a truck and other vehicles ahead of it. This gives enough braking space. Truck drivers can move their heads forward to check whether the distance is enough.

They can also use the 3-second rule whereby they allow 3 seconds to pass after the car ahead has reached a certain spot before reaching the same spot.

6: Slow Down for Turns and Always Signal

Truck drivers should always slow down the truck while driving on a curvy road before taking a turn and in cases of poor visibility to avoid collisions.

They should remember to signal before changing lanes, even if they are on a long stretch of a road or during non-peak traffic periods.

7: Be Prepared for Changes in Weather Conditions

Weather can be unpredictable, and some places generally experience bad weather conditions. Truck drivers have to be prepared for any sudden weather changes. Conditions like rain or snow can affect visibility and bring about slippery roads.

Skills Every Truck Driver Should Have

Just like with other careers, truck drivers require certain skills to thrive in their job. Some of the skills are:

Truck drivers do not need high school diplomas or college degrees. However, to be a truck driver, one has to go to a driving school and acquire a Class A Commercial Driver’s License (CDL).

With the proper certification, it becomes easy to get a truck driver job. Some companies even offer their drivers more intensive training for better performance.

Most of the time, truck drivers are alone on the road. This requires self-dependency skills so that one can tackle and solve issues they face on their own. Some mechanical knowledge is also worthwhile because the truck can get a puncture while one is out there.

Although truck drivers will spend more time alone, they still have periods where they have to interact with others. It could be while making deliveries, conversing with colleagues, talking to the boss, or speaking with other drivers on the road.

Having good communication and customer service skills is a huge plus during these instances. It fosters good relations with others to avoid being known as that grumpy, unfriendly truck driver.

Being someone reliable who the boss can rely on and customers can depend on for deliveries works out in the driver’s favor. Truck drivers should be timely, deliver goods in good shape, and observe safety requirements on the road.

Truck drivers should plan routes and know where and when to stop. Proper time management will aid them in dividing their time accordingly to be efficient.

This involves having an idea of when deliveries should be done, when to take breaks, how long, and when to take time off for family affairs.

Sometimes truck drivers will be stuck in traffic, experience schedule delays, deal with mechanical issues, follow a wrong route, or go through unpredictable bad weather challenges. Patience will come in handy during such situations and enable one to calm down and handle everything in the appropriate manner.

Driving for long periods without breaks can be detrimental to one’s health. Truck drivers should take enough time off to rest and recharge before getting back on the road.

An example is taking short 30-minute breaks in between 8-hour driving shifts. One should also strive to eat healthy, exercise, call family, and do other relaxing activities to stay healthy and energetic.

Truck drivers have a fun career, but just like other jobs, some things may be irritating to deal with every day. They should learn to be patient, avoid road rage, be aware of what’s happening around them, and stay alert at all times to act fast in case of abrupt braking.